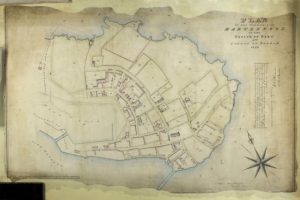 According to the Town Plan 1841 map there were plans to build York Place, but it hadn’t been built yet. You can see from the map that York Place was to be built on the very edge of the Headland; there was a wide open space between it, which in later years came to be Albion Terrace.

At this time the person who was to become the first occupant, Richard Hunter, aged 28, was living with his parents on Town Wall. His occupation was pilot. 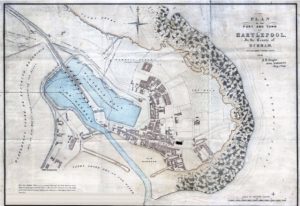 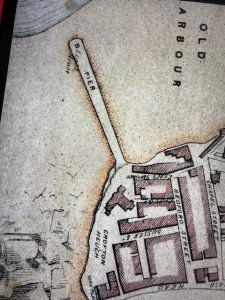 By this time Richard aged 38 had moved into No 3 York Place with his wife Margaret aged 27 and their young family, Thomas aged 5, Mary aged 2 and Margaret 8 months. Richard was working as a pilot.

OTHER PROFESSIONS ON THE BLOCK

2 more pilots, 2 fishermen, 2 seamen, a shipwright, a tailor a joiner, a blacksmith and a ship boasen

Richard and Margaret are still at 3 York Place. Richard is still working as a pilot and Thomas now aged 15 is following in his footsteps as a pilot. There are now 4 more children – Richard (8) Robert (6) Ruth (4) and Matthew (2).
OTHER PROFESSIONS ON THE BLOCK
A Tailor, house joiner, seaman, 3 more pilots, 2 fishermen, an engine fitter, a printer compositor, a rope maker and a ferry boatman. (There was a ferry that linked the Headland to West Hartlepool at the end of Town Wall.)

Now aged 55, Richard was still working as a pilot. His son Thomas (25) is listed as a Pilot’s assistant and his daughter Mary (22) is a dressmaker. Son Richard (18) is a cabinet maker and Robert (16) is a boilersmith apprentice. Two more children make up the household Dorothy (9), Elizabeth (6). They’ve also taken in a lodger (a frequent occurrence with households in those days). Ada Evens (21) a dressmaker from London.

Richard now aged 69 is listed as a sea pilot. Son Matthew is a boat builder, Dorothy is following in her sister Mary’s footsteps as a dressmaker. Mary is not on the census but as she would be 32 by now it is reasonable to assume she has married and left home. Son Robert sadly is also no longer on the census. He drowned at sea on 29 May 1884 aged 19.
We now have another addition to the household, Helena aged 8.

Richard is now aged 78 and his wife aged 66. He is still listed as working as a pilot – no NHS pension in those days. Matthew (31) is still at home and is still a boat builder. Dorothy (28) and Helena (18) are also at home but no profession listed for them.

After all of that hustle and bustle of family life, lived for 40 years with Richard and Margaret Hunter, No 3 York Place had new occupants.
John (43) and Elizabeth (45) Carter/Curtis (the writing is hard to read) were residing at 3 York Place. He was a carpenter/labourer – shipyard.
They had been married for 3 years and had no living children.
Another story begins…